A report on the cultural heritage aspects for a basic assessment for the proposed construction of the Eskom Riversong power line and substation in the City of Tshwane, Gauteng Province

Archaetnos cc was appointed by Landscape Dynamics Environmental Consultants to conduct a basic assessment relating to the cultural heritage aspects for the proposed construction of the Riversong power line and substation. This is situated within the borders of the City of Tshwane in the Gauteng Province. Three options for the route were surveyed.

It is proposed that Route Alternative 2 be the final route, depending on the outcome of other specialist?s reports. Suitable mitigation measures are proposed. Once these have been implemented, the proposed development may continue. 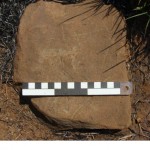