A 2nd report on the archaeological investigation, exhumation and relocation of burials impacted on by mining operations on Kennedy’s Vale 361KT, near Steelpoort Limpopo Province

Archaetnos cc was requested by Rhodium Reefs Limited (EASTPLATS Kennedy’s Vale) to assist with the investigation, exhumation and relocation of a number of known and unknown graves located on the farm Kennedy’s Vale 361KT near Steelpoort in the Limpopo Province. These graves, amongst others, were identified during a Cultural Heritage Impact Assessment by Francois Coetzee of Unisa Archaeology during August 2011 for the proposed Kennedy’s Vale Mine.

Archaetnos was required to help with the investigation, exhumation and relocation of all the graves older than 60 years of age and those unknown (in age and identity). Tsogo Funerals relocated a number of known graves during late 2011 and early 2012, before Archaetnos cc, in conjunction with Martin’s Funerals Lydenburg and Randburg started to exhume and relocate the other graves from the sites that will be impacted on by the development of the mine’s Tailings Dam facility. The first number of graves were exhumed and relocated during July 2012 (See Report AE01249P) under Permit BG/12/02/003/87. A total of 11 burials from 8 graves were investigated during this session.

Two graves older than 60 years of age were investigated and exhumed during August 2012 after final consultation with the two affected families were concluded.

This report discusses the results of this second round of investigations and exhumations. 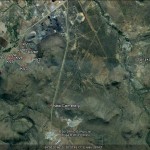