Archaetnos cc was requested by Dr JCC Pistorius to assist him in conducting a phase II heritage study for Ferret Mining. The study is the result of a phase I heritage impact assessment done in June 2007 which recommended a phase II study. Ferret Mining is conducting mining activities in the Central Rand Gold Project Area which is situated on portion 2 of the farm Paardekraal 226 IQ.

This specifically is aimed at the documentation of the sites indicated as being of high cultural significance. It also is concerned with obtaining more background information regarding the mine and property.

The reports deals with the findings after a survey have been conducted in the Deeds Office in Pretoria as well as the National Archives Repository in Pretoria. The webpage of the City of Johburg was also consulted as well as some other historical sources.

The farm was registered in 1866, but it probably was established as early as the 1840?s. Gold was apparently already discovered here in 1852. It seems as if large scale mining activities only started here in 1890.

The different structures identified during the phase I survey seem to day to the first half of the 20th century. Unfortunately it was not possible to obtain positive identification of all of these structures, but possible functions are listed. The report gives an overview of the history obtained.

In accordance with the recommendations of the phase I study, this report agrees that the structures may be demolished as it has been sufficiently documented. A destruction permit for this purpose should be obtained from SAHRA. 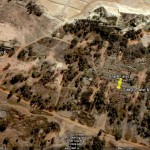